More than 80 people attended the first face-to-face session of the TECSAM Network Kick-Off Meeting, a meeting point for member groups.

The Kick-Off Meeting and General Assembly session opens a new stage of the Network marked by the incorporation of new groups and more ambitious actions.

Almost all the research groups members of the TECSAM Network have participated in the first Kick-Off Meeting of this year, held on Monday at the Auditorium of the Parc Sanitari Sant Joan de Déu (PSSJD), with the aim of presenting themselves and getting in contact with the rest of the member groups.

This is the first official meeting of the TECSAM Network with all the member groups, both early and new members, following the announcement of the renewal of the Network for a period of three years.

The conference also provided the opportunity for more than eighty attendees (including principal investigators and researchers from the groups) to learn about the Network’s strategic lines and roadmap 2023-25.

The session has been a meeting point for member groups and has given voice and space to the PIs and other representatives to present their main lines of research and the most outstanding projects developed within the group.

The objective, in any case, has been to favour the generation of synergies and joint actions in the field of mental health transfer.

The afternoon session also included the General Assembly, with the exclusive participation of the principal investigators of each group and one institutional representative from each member institution, which opened the debate on issues of governance, activities and budget.

In this sense, emphasis has been placed on the renewal, on the one hand, of the Network’s Steering Committee, with special consideration of the gender issue and the inclusion of the people affected by mental health problems, and the creation, on the other hand, of an Internal Evaluation Body to ensure gender inclusion and the establishment of indicators for monitoring the fulfilment of the Network’s objectives. 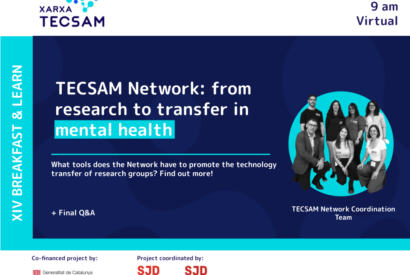 TECSAM Network: from research to transfer in mental health